Last June the City filed a lawsuit against the owner of the building at 2900-2910 West Devon alleging disrepair and building code violations. The building, formerly home to Rosenblum’s World of Judaica, was and is home to several vacant storefronts. The alderman, describing the building as an “eyesore,” announced that she wanted the building brought up to code and the storefronts rented. 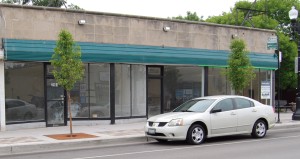 Well, it appears that two new businesses will be moving in. They may not be exactly what the alderman had in mind. The corner storefront will become yet another dollar store, one of at least half a dozen such stores on Devon.

The storefront next to it is loaded with washing machines and dryers, so it appears this may become a Laundromat. Nothing official yet, no signs, just equipment.

These businesses will at least fill the storefronts. The next block to the east has seen two stores close recently. One had its business license revoked by the State of Illinois Department of Revenue. The other went out of business.

Where’s that ‘spirited economic plan” the alderman promised in 2011?

4 thoughts on “Fill Those Storefronts!”

This site uses Akismet to reduce spam. Learn how your comment data is processed.