I am stunned by how dirty Devon Avenue is. How can the alderman and the merchants insist that Devon represents international shopping at its best when the street is so filthy? Several restaurants and stores on Devon have been temporarily closed in recent months because they failed to pass City inspections. Violations included everything from roach and rodent infestations to filthy food prep and storage areas.

Many of the pictures I took over the past three days are nauseating. Half-eaten food tossed in street excavations. Food debris left on newspaper boxes and safety cones, not to mention windowsills and plant boxes. Coffee and yogurt cups as well as beverage bottles tossed everywhere. The clincher was a filthy diaper left on pipes outside a sweet shop.

Last week I was walking on Devon when a merchant appeared at her door with a broom and a pile of trash from inside. She was about to sweep it into the street excavations. I see merchants sweep debris from their stores onto the sidewalks on Devon every week. A few days after our streets were swept a couple of weeks ago, the cleaning crew from Republic Bank showed up with leaf blowers and cleaned the parking lot and ATM by blowing the trash into the streets.

Here’s just a sample of what I found:

A new low in dirtiness. A loaded diaper is left atop pipes outside a sweet shop, Washtenaw north of Devon. 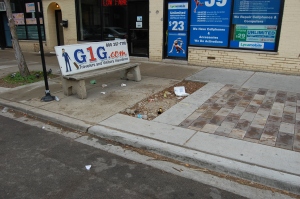 The new street furniture will encourage the dumping of even more garbage. The plant pots on Devon west of California are already filled with garbage. 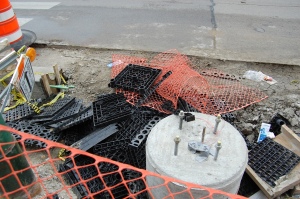 These black plastic trays hold merchandise when it’s delivered to stores. Merchandise is removed and the trays are dumped into the street scape excavations. You can see this in almost every street excavation on Devon.

Another sweet shop, another mess.

Why use a trash can when a safety cone works just as well?

Another pig who decided to use a safety cone rather than a trashcan This was a couple of blocks from the first one. 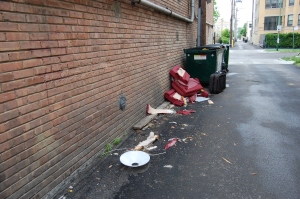 Garbage in parking lot and E-W alley between Campbell and Artesian. 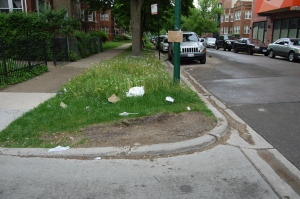 Rockwell, north of the E-W alley behind Devon. Residents who live closest to Devon see this and clean it every day. It’s all from shoppers.

Another sidewalk excavation used as a garbage dump.

Todd Shea is an American musician whose life was transformed by his experiences on September 11, 2001. In New York for a performance at CBGB nightclub, he saw the twin towers burning, then set to work helping the first responders. In 2005 he volunteered to go to Pakistan to help with disaster relief after the earthquake that killed 80,000 people. It was there that he founded CDRS (Comprehensive Disaster Relief Services), a not-for-profit that has established a hospital in Chikar, a remote village that previously lacked medical services.

Shea also provided disaster relief services in Haiti after its 2010 earthquake, in Sri Lanka after the 2004 tsunami, and in New Orleans after Hurricane Katrina in 2005. He is based in Pakistan.

Shea’s hospital has an annual budget of about $175,000, almost entirely funded through charitable contributions, and he is now in Chicago on an awareness and fundraising tour.

You can meet Todd and enjoy some great music, food, and fellowship on Friday, May 15, at 73 West Monroe Street at 5:30 pm.  In the meantime, you can learn more about Todd and his work with CDRS and also enjoy some YouTube videos of Todd performing his music here.

DNA Info reported yesterday that the Norwood Park Chamber of Commerce will sponsor a community meeting so residents can learn about and discuss the proposed medical marijuana dispensary that would be located on Milwaukee Avenue. The 41st Ward’s new alderman, Anthony Napolitano, will attend, and told DNA Info that he would listen to both the residents and the Ward’s Zoning Advisory Board before deciding whether to support or oppose the dispensary. [He opposed it during the campaign.]

Imagine: An alderman willing to hold an open meeting with residents and the dispensary’s owners to discuss both sides of the argument for an MMD.

Contrast that with the behavior of Ald. Debra Silverstein in the 50th Ward. She simply declared her opposition to a medical marijuana dispensary and felt no need to tell her constituents why she opposed it. When residents sent e-mails to the ward office and complained on social media about her high-handedness, she backtracked and said she opposed the location, claiming she wanted to protect the ward’s children. The 50th Ward dispensary would be located next to Warren Park where, the alderman said, “hundreds of children” play.

Now she’s raised the fear of crime, an issue that has worked well for her in the past. Because banks and credit card companies will not accept payments for medical marijuana, it’s a cash-only business, and the alderman now says that this is the real issue. She is “not comfortable” with any business that requires 24/7 security, even though that security would be provided by off-duty law enforcement officers.

She has not, however, scheduled any community meetings where residents can meet the dispensary’s owner and discuss with him and the alderman the benefits and drawbacks of locating the dispensary on Western Avenue.

There’s no 50th Ward zoning advisory board, although Silverstein said during her 2011 campaign that she favored creating one. She has, as usual, failed to follow through. This is in keeping with her hands-off policy on economic development. The “spirited economic development plan” she promised during that same campaign has also failed to materialize. She rarely invites residents to open meetings to discuss community issues, unlike other north side aldermen. In the 50th Ward, the people’s business is conducted in secrecy.

It’s fair to say that while she favors community input and economic development, she has no real interest in either.

Because of the Chicago tradition that gives aldermen the final say on economic development in their wards, and the recent back-door maneuvering and packed-meeting decision on the Devon-McCormick theater site redevelopment, I suspect that no amount of community support will allow the dispensary to open on Western–or anyplace else in the 50th Ward.

It doesn’t mean we should give up the fight. It means we have to organize. Sign the petition in support of the MMD. Attend the May 28 hearing. Follow the money. Track her donations and expenditures. Hold her publicly accountable for her positions. You might also read this series of articles from the Chicago Tribune, written in 2008. It’s every bit as relevant today as it was seven years ago.

If you support the opening of a medical marijuana clinic at 6501 North Western Avenue, please sign the petition below. It will be delivered to the Zoning Board of Appeals at its May 28 meeting.

The alderman has used her latest newsletter to further explain her position on the medical marijuana dispensary proposed for Western Avenue. She now claims that her “personal objection to this location is due to the unique security needs… required”  by the business. She says that she is “uncomfortable with any business that would need a fingerprint scanner and two armed guards being right next door to a park where hundreds of children play.” The alderman also notes that because credit card companies and banks currently do not recognize sales of medical marijuana, the business will be cash-only.

Regardless of the alderman’s opinion, the law does not prohibit this dispensary from opening next to Warren Park. If the alderman believes the law should be changed, then both she and her husband, State. Sen. Ira Silverstein, are in position to propose bills to that effect. So far, neither has done so.

According to a recent article by Jeremy Culver for WGEM in Quincy, Illinois, the state has yet to see a single dispensary open. State Rep. Lou Lang, who wrote Illinois’ medical marijuana bill, is quoted extensively by Culver. Lang notes that his bill provided for a four-year trial program and that nearly half that time is already gone. The state experienced some difficulties in establishing its regulations, and Lang notes that the longer it takes to set the program up, the more expensive the marijuana is likely to become. In the meantime, Illinois patients take their prescriptions elsewhere. Read the full article here.

The alderman has asked again that neighborhood residents appear at City Hall at 9 a.m. on May 28 for the hearing at the Zoning Board of Appeals. According to the City’s Web site, these meetings usually take place in the City Council chambers.