It was so nice on Sunday that I decided to take a walk on Devon from California to Western. The groceries were crowded, the other stores were empty, quite a few stores were closed, and some were closing up shop for good.

Bag of garbage tossed on a side street parkway. Lots of garbage on the street, too.

Blocking a crosswalk. Whoever’s in the store is always far more important than whoever’s trying to cross the street. And he won’t move.

Signs of the times: Business for Sale and Moving Sale. 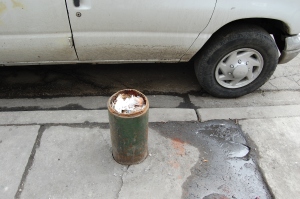 Not a trash can but it will do. At least the garbage isn’t on the ground. 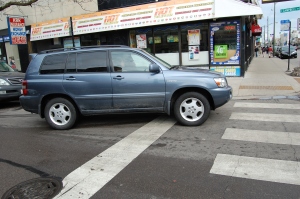 This guy appeared to be turning east but made a quick swerve to the right and turned west in front of me.

There are always abandoned shopping carts. 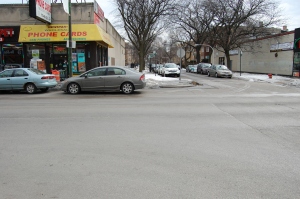 Garbage and graffiti but no phone.

No fewer than three vehicles blocking the bus stop at Rockwell. The CTA moved the stop from the corner to a spot in front of the supermarket. Cars park, wait, and load without any regard for bus passengers, who must board and alight in the middle of the street. 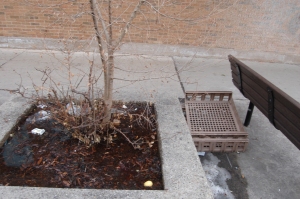 Crates are always dumped behind the seating outside this supermarket. The planter always has more garbage than plantings.

Lots of debris at Devon and Washtenaw.

Bottles left over from Saturday night’s drinking. More bottles litter this parkway all the way to the alley and then east to Washtenaw. Devon and Fairfield.

This site uses Akismet to reduce spam. Learn how your comment data is processed.